MyToaster has been popular on its own for a long time. I have gotten requests to talk about the toaster on news stations, interviews for magazines, and to have the toaster brought to IoT conferences. Every trade show we did had MyToaster on display. The “touring toaster” was a stand-in and took a lot of abuse over the years.

Another significant event for MyToaster is when the Washington Post posted an infographic on “The Marriage of Appliance and Internet“. 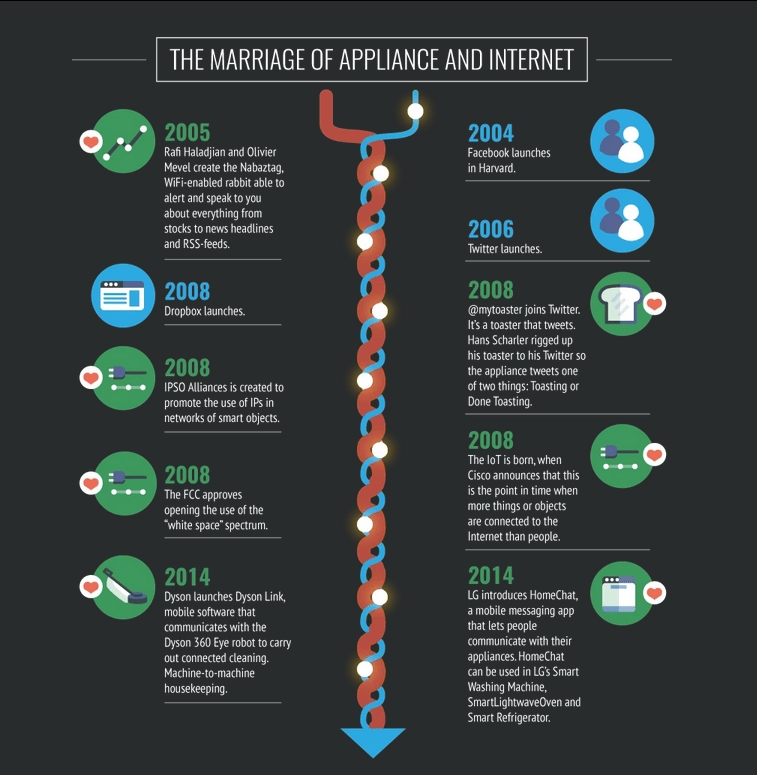 They listed that MyToaster from 2008 was a significant event that shaped “Connected Appliances” and “Consumer Internet of Things Products”.

2008 – @mytoaster joins Twitter. It’s a toaster that Tweets. Hans Scharler rigged up his toaster to his Twitter so the appliance Tweets one of two things: Toasting or Done Toasting.

A man in Pittsburgh, Pennsylvania has rigged his toaster to tweet “Toasting” or “Done Toasting” with each use, and — despite the account’s lack of variety — has gained more than 2,000 followers.

In order to further connect us with our possessions, Scharler and his friend Jason Winters created a platform for developers called ThingSpeak— a sort of Twitter for things — that lets objects send messages, broadcast their location, graph their temperature, and more.

“Tweeting appliances speaks to this whole ‘internet of things’ idea,” says Hans Scharler, a tech consultant who also writes comedy material. “If your appliances were outputting information, it can always go to a database. But we love to share information. So why not find a way to do that?” Scharler found online fame for his twittering toaster, whose tweets alternate between “toasting” and “toast is done.” @mytoaster has about 200 twitter followers.