One day you put your toaster on a social networking site. And then on another day you find out that your toaster has more friends than you. 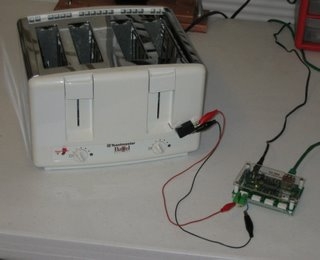 This little story sounds made up. Well, it’s not.

My toaster has had a Twitter page since December 2008, tweeting the status of my toast making habits for all of the world to follow. On occasion people even write to the toaster to ask what it’s toasting. Oddly enough, it can tell you.

I get asked, “Why have your toaster on the Internet?” Well, it’s a starting point for future projects and part sarcasm. I have been working on gizmos, web control, and power / resource management projects with my friend Jason Winters of ioBridge for over a decade. One day I had the idea to overlay appliance usage data onto a graph of my power consumption for my house. My theory is to use this appliance meta data to reduce the power I use everyday by pointing directly to the power hogs. It’s a start to my internet of things at my house. If you want to get start your own Skynet, visit Wired’s Wiki on making things talk. I use the IO-204 control and monitor module from ioBridge.com.

My Toaster has been recently written about on Wired.com, ReadWriteWeb, PC World, Tiscali, De Morgen, XYCity China, etc. If you want to hear about it straight from the bread slot, you can get live updates from my toaster by following @MyToaster on Twitter.

I am now jealous of my toaster which has made for awkward moments when I want some crunchy Wonder Bread.