Yes, I went to Radio Shack today. And, yes, I will still call it Radio Shack. And, yes, sometimes you need a quick electronics fix. I get most of my stuff online these days.

Radio Shack had the Erector Spykee Mini Vox robot on sale for $10. The Mini Vox takes voice commands and makes the robot move, talk, dance, and even fire a “laser.” The box says, “Ages 7+” – I fit that category. The box also says, “Some assembly required.” It should have said, “Some de-assembly required.” 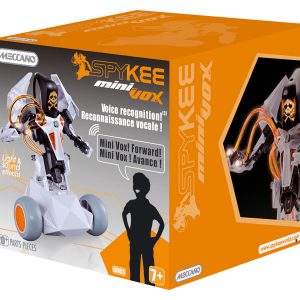 While playing with the demo model at the store, I realized that I could reuse the voice commands to set inputs on a microcontroller.

Here are all of the commands and their response:

When I got Mini Vox home, I ripped it apart. I was quite surprised by how responsive the voice commands are and how many parts are inside this little robot. Most of the parts are reusable.

Here’s what you get for your $10 investment: 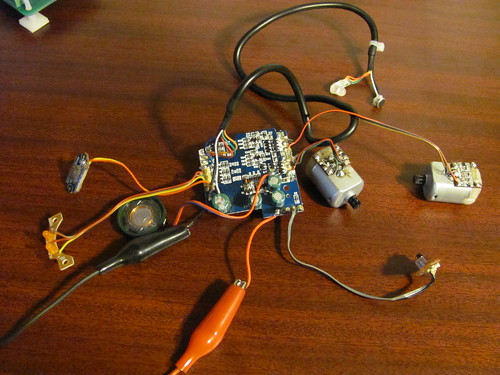 If I come up with something clever, I will let you know. But, the first piece of my Iron Man suit has fallen into place.