I am going to share my latest experience with Kickstarter and review Going Cardboard – a documentary about board games. In order to get started, I want to introduce what Kickstarter is all about first. I find myself telling people about Kickstarter as my experience has been phenomenal as a backer. I am becoming an evangelist.

Kickstarter is a website that allows people with projects to find financial backing by offering the backers rewards.

(the much longer version)

For example, let’s say you a friend that wants to make a music CD and music video for their band. (And, we all have that friend.) Traditionally, they would have to scrape some money together and try to self-finance their project. Kickstarter allows that person to post a project description and video to a central website where people can back their project. They offer backers rewards such as early access to download the CD, wall art, a signed CD, and even creative things like, a chance to hang out back stage or be in the music video. In some cases, you can reach your target audience. In some other cases you find a whole new audience. What I love about Kickstarter is that it forces the people submitting their projects to think through budgets and come up with a strategy. If they say it will take $5,000 to make an album, they need to raise at least $5,000 to get rewarded the money. If not, the funds do not get transferred from the backers, and more importantly, the friend trying to get their music out there found out that the audience may not be as big as they thought. Trust me, I know a lot of musicians with a 1,000 CD’s in the garage. Knowing the size of an audience is important  and Kickstarter provides a clean mechanism to find that information out. If your project fails, you can reevaluate, try again, email more people, find creative rewards to offer potential backers, and try like hell to get outside of your circle of friends.

I received my Kickstarter rewards for Going Cardboard today, almost 10 months after backing this project by Lorien Green. The wait was long but so worth it. The thrill of opening the box of items felt like Christmas. Lorien provided great rewards to her backers and raised 3 times the amount of money that she requested. Her film turned out great and so glad that I stumbled into it while browsing Kickstarter for new projects. 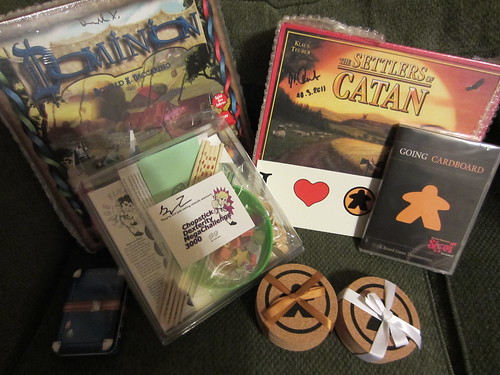 I backed this project because of my interest in board games. I have a circle of friends that gets larger and larger that loves to play board games. The games we play get increasingly complex, but often I find games that stick. I was introduced to Dominion by Rio Grande Games at one of our annual gatherings called StruebCon. This is a great game and I teach the game to as many people as I can. It’s a great game to introduce to people, they will get hooked and may try other games. Before you know it, you have another gamer friend.

Going Cardboard features interviews from game designers, game publishers, and game players. There is amazing footage of several of the gaming conventions such as Essen in Germany that draws over 150k people each year. In the US, we typically do not celebrate the game designer. This is the person or group of people who created the game. It’s weird to think, but someone “invented” Monopoly. A new class of games called “Designer Games” have the game designer’s name right on the front of the box (these are the games I love). Maybe in a few year’s time, we will celebrate the designers like they do in Germany and Korea. Think of the memories that they have created for us. Game publishers are the folks that take the chance on the game designer and provide the resources to get the game printed, manufactured, and distributed to game stores and via the Internet. Game players are the wonderful people fo the world that keep the eco system of games going. “We” buy games from the publishers that we love, like Rio Grande, Mayfair, and Z-Man, and in turn more games get published from the game designers. It’s a wonderfully small world in most cases you can meet and interact with the entire supply chain at one gaming convention. Thanks to mechanisms like Kickstarter, I am seeing the industry blur the lines a bit as game designers, publishers, and players are all a little more integrated into the whole experience.

This documentary celebrates all angles of the board game industry. Watching the film is like sitting around talking to your friends about board games, telling stories of what you heard about new games, games that didn’t make it the shelves, and new games that you found on BoardGameGeek. Going Cardboard gives you a window of this budding universe of board games. It comes at a perfect time. I believe that board games are hitting a tipping point. All of the evidence is adding up. Even my local electronic game store features a board game night every week where you can unplug and play games like Dominion, Settlers of Catan, Battlestar Galactica, Arkham Horror, Lost Cities, and on and on.

I recommend “Going Cardboard” to anyone that’s interested in games. You should offer the DVD as a gift or hold a screening at your house, invite friends over to watch and let them in on what you have been doing all of these years. You might find a few closet gamers that just needs a little push.