Thanks to my friends, I have been playing a lot of board games as of late. They started me off with some pretty stock games and then slowly introduced me to deeper Euro Games, Cooperative Games, Abstract Strategy, and Miniatures Games. Now I know what Meeples are, I have said, “I have Wood for Sheep”, and I have even oar raked another ship recreating an ancient naval battle. 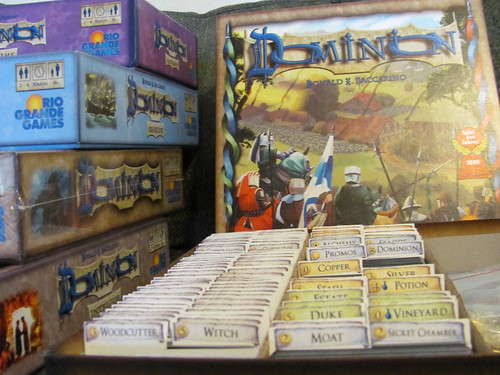 I really love this game and my appeal for Dominion is three fold:

You might be thinking, “Hans, I have not heard of this game before, what gives?” My quick reply would be, “There are a lot of games out there,” Hans said gamely. If you have grown up in the United States, there are a few games that everyone has been introduced to – Monopoly, Sorry, The Game of Life, Candy Land – if you are “lucky” you might have played Risk, Scrabble, Stratego, and Trivial Pursuit. In general, you will notice that US favorite games are mostly luck based, meaning you use a randomizer (dice or a wheel) and then move a piece on the board. There is a big part of the game you can’t control, but in most cases these games are fun. Some of my best memories as a kid was playing games with the family and extended family. Now, in other parts of the world the games are less luck based and more choice based. Most European and Korean games are games played with a lot of choices. You have to choose what to do and each player has the same opportunity. As long as your playing board games, I am okay with either style of game or a game with a good combination of luck and choices. I recommend Lost Cities, Pandemic, Acquire, Settlers of Catan, Power Grid, and Divide and Conquer 😉 to name a few gateway games.

The designer and publishers of Dominion have released multiple expansions and promo cards that add more action cards and twist to the base game. An issue of storage and portability comes into play. You want to take Dominion over to a friend’s house or to a convention, you would have to carry 4 boxes. After some research online [Labels, Box], I created my own storage solution. I took one box and pasted in dividers. Using card stock and labels, I then added dividers for each set of cards. The result is that all of the cards are in one box in order like a file cabinet. 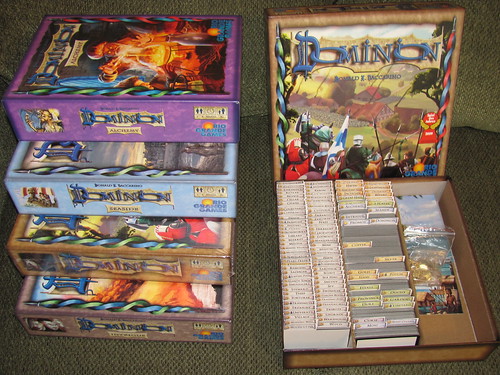 Looks like there will be a new expansion for Dominion called Prosperity that is scheduled for release Aug/Sep 2010. Just maybe it will be ready for Gen Con 2010 that starts in early August this year. The good news is that I think that expansion will fit in my uni-box as well. The box is getting heavy.

It’s time for you to Throne Room + Woodcutter and buy Dominion and the expansions.