Here’s a last minute Kickstarter for you to check out… Strife: Legacy of the Eternals. 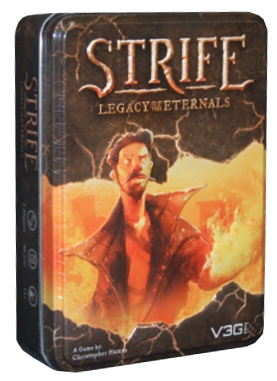 Strife is a quick, 2-player card game is designed by Christopher Hamm and will be released by Vision 3 Games in 2015. You can get in now and help produce the game. The game has gotten lots of great reviews and attention since it was demonstrated at Gen Con 2014 in Indianapolis, IN.

PS… I *almost* stopped backing Kickstarter games, and then I found Strife at Gen Con 2014. I backed a lot of games and had many disappointments. After seeing the game play, meeting the team behind the game, and seeing how well the Kickstarter campaign was being ran and updated, I decided to break my rule, and throw some cash towards this game.