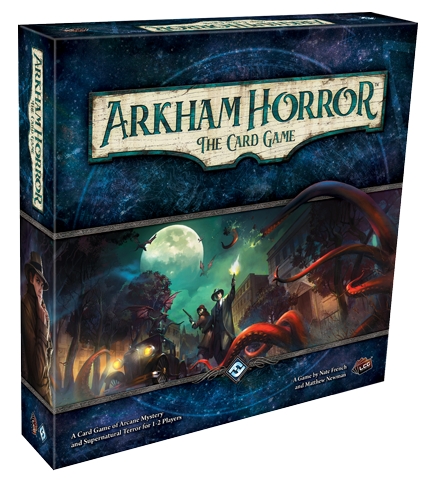 It’s time to Enter the Mythos

A “living card game” means that all of the cards that you need are in the box and the game can evolve over time with add-on packs that add new characters, enemies, and plot points. The game is compelling to me. It feels like the right balance of story and strategy… and luck. I am also a collector. I like to collect things related to things that I like. In this case, it should have been easy to collect all of the Arkham Horror: The Card Game cards since they release all of the cards and they aren’t collectible. In a few cases, Fantasy Flight Games released “promo” cards and early versions of the add-on packs. They released these packs at Gen Con, Arkham Nights, or bundled them with books. This interested me even more, to make sure I attend the events or pre-order things directly from Fantasy Flight Games. I keep up-to-date by following the Arkham Horror: The Card Game blog at Fantasy Flights Games, the FFG Organized Play Facebook group, new eBay auctions, and the Arkham Horror LCG subreddit.

The first Arkham Horror: The Card Game promo debuted at Arkham Nights 2016 held at The Fantasy Flight Games Center in Roseville, MN on October 14, 2016. Attendees who preregistered for the event got several promos including an advanced copy of the Curse of the Rougarou scenario pack.

I didn’t attend this event, but this is when I started to notice the extra promos. I asked someone from Fantasy Flights Games about promos. They said that the promos should be considered prizes for participation in the events. Right after Arkham Nights 2016, I noticed that people were selling their Arkham Horror promos on eBay. This is where avid collectors started their collecting journeys. Very few complete sets of promos exist in the wild making Arkham Horror LCG a fun thing to collect.

Shortly after Arkham Nights 2016, Fantasy Flight Games announced the release of The Investigators of Arkham Horror, a full-sized, premium book about the investigators. If you were able to pre-order this book, you also received promo Arkham Horror: The Card Game cards, a playmat, and four 12″x18″ posters. The promo cards featured Marie Lambeau and included her investigator card, mini-card, and two signature cards. The playmat is extremely rare and features the boundless and chaotic Ancient One known as Azathoth, with art by Brian Valenzuela.

Some promos have shown up on eBay. Be careful when bidding, buying or making offers. Some promos get released version by Fantasy Flight Games in later releases. Make sure to check icons at the bottom of the card. For example, Arkham Nights and Invocation promos are marked with a “fire” symbol and the year. The version that got released later has the normal scenario markings. Scenario decks that get released in advance often have a “not for sale” tag near the UPC on the back but not all.

I don’t have everything related to Arkham Horror: The Card Game, but I am looking for a few things. If you have one of these items, contact me. I have money or we can make a trade.